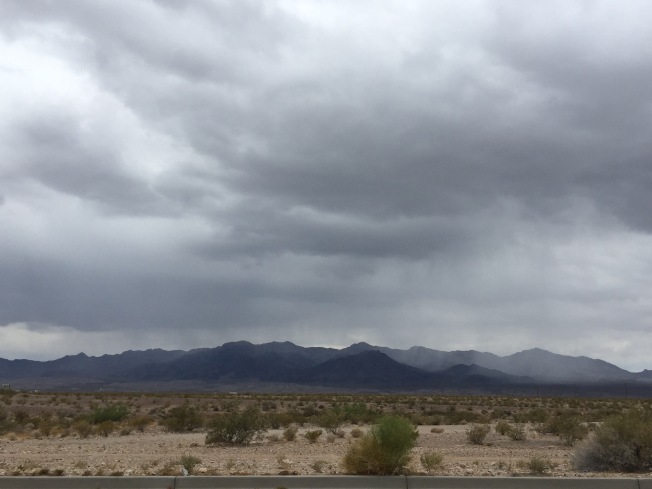 In Arizona, rain is good weather.

When you look at this picture of a great blue heron, what draws your attention? Perhaps you see his eye, yellow iris matching the yellow of the bill tip staring back at you. Perhaps you notice the black and white stripes over his head, or the frumpled feathers leaving the impression he needs to comb his hair. No matter what it is you see first, you will soon be drawn to study his bill, thick, solid, long and sharp.

It is far more than his mouth. It is his self-defense, his bread and butter, and his personality. Everything about God’s design of the heron is important, but it is easy to believe the bird holds the most pride in its bill.

What is it that defines you? Is it a point of appearance, a capability, or maybe some aspect of your personality? Whatever it is, I can pretty much guess that it affects how you see the world. Like a heron, which is always looking over its bill, you allow how you see yourself to color everything else you see.

As a child I came across a group of kids speaking of who they were king over. When they asked me I said I was king over no one, a response which brought me some degree of pain. I discovered too late that what they really meant was who they thought they could beat in a fight. It was a way of describing their prowess based on how they saw themselves. If you watch you can see adults doing the same thing, although probably with a little more subtlety.

Proverbs 21:2 HCSB People may be right in their own eyes, but the Lord examines their heart.

I have run out of bird pictures so today I am showing you a picture of a javalina. The more proper name for this critter is collared peccary. They look and sound like pigs, but scientists assure us they are not pigs.

This particular one is a mom, and it made an appearance with several little ones, while I was on a mission trip recently. The closer look, and the lack of new birds to show you, caused me to do some research on this little pig. Uh Peccary.

Just like pigs, they have a disk of cartilage forming that distinctive nose. That nose is a deceptively powerful organ and it is how they identify the world around them. You and I probably rely on our eyes the most, but a javalina will rely on its nose. The sense of smell is so specific that they identify each separate individual in their herd or family by smell, even from some distance away.

As a person who often has strong allergies, and therefore often has almost no sense of smell, I cannot imagine what it would be like to stick my nose in the breeze and say, “Cousin Stinky is on his way over.” I admit I can identify a large number of people by the way they sound. I can recognize a number of people by the way they move, even when they are too far away to truly see. I can even tell by the way a hand lands on my back that it is my wife. But I cannot identify any of you by smell.

Probably because of my nose blindness, to borrow a phrase from a commercial, I am surprised by 2 Corinthians 2:14-17, where the Bible teaches the importance of smelling good. Well, maybe not good, exactly. Maybe smelling Christ-like.

14But thanks be to God, who always puts us on display in Christ and through us spreads the aroma of the knowledge of Him in every place. 15For to God we are the fragrance of Christ among those who are being saved and among those who are perishing. 16To some we are an aroma of death leading to death, but to others, an aroma of life leading to life. And who is competent for this? 17For we are not like the many who market God’s message for profit. On the contrary, we speak with sincerity in Christ, as from God and before God.

This passage indicates we are to be the ‘Fragrance of Christ’ to God, being an ‘aroma of death’ to the rejecting world, and ‘an aroma of life’ to those who are being saved. Now that is quite a mental image isn’t it? Is it any wonder Paul follows the assertion by saying, ‘And who is competent for this?”

Let me try to help you to understand what it is asking for. We believers are to glorify God. We can do so because God will work in us to bring out a basic Christ-likeness. Here that likeness is described through the sense of smell instead of sight, but it is still being like Jesus that is being described. God sees this Christ-likeness, when we are obedient, sacrificial and choose to serve Him. Here described as the ‘fragrance of Christ.’ For other believers it is when we model the Savior that we attract them to salvation. We edify them in Godly living, and model Biblical living.  In other words our lives demonstrate the life found in Christ.

However the picture for the ones who will reject Christ is totally different. These are confronted with the sacrifice of Christ, His death on the cross. They become aware that Christianity is a death. To serve Christ they must die to self, to serve God they must kill their own ideas and lofty principles. For some this sacrifice, this death too self, is too much to ask, and to them we become an aroma of death.

Don’t be discouraged, nor surprised by this; simply accept it as a part of God working through you.