A couple of weeks ago I put an entry into the Flash! Friday contest. It was a first time effort and to my surprise, it won. That earned me the right to post a badge on my blog, so here it is.

I have entered this contest a couple of times since. I find it fun, but not so much as an honorable mention since that first piece. If you want to try your luck in this contest here is a link.  http://flashfriday.wordpress.com/ They post a picture each week as the prompt and the judges vary each week.  Be sure to read the full rules and the specific instructions of that weeks judge if you enter.

This week I also entered another contest called the Mid-Week Blues Buster. This contest puts out a song as the prompt. It was my first time in this contest and I won it as well, earning the right to display their badge.  So here it is. 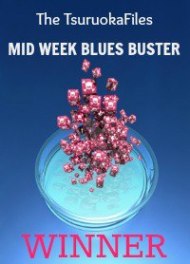 If any of you are interested in entering this contest here is a link to it. http://thetsuruokafiles.wordpress.com/ This contest also gives a prompt, although instead of a picture they use a song as the prompt.

So just for fun, here is a copy of my winning entry.  If you want to see the song that prompted it follow the link above and find it there under week 31 posted on Sept. 17.

Amber looked at herself in the mirror for a long time. Eventually she said a quiet goodbye. Talking to yourself must be the first sign of sanity, she thought.

She locked the shabby studio apartment behind her and headed on foot to the bus station. She put her hand over the $178.50 in her pocket, just to be sure it was still there. She had heard of golden parachutes, but her pocket full of cash was more like a frayed rescue line.

She didn’t stop by the diner where she had worked. There was nothing in this town she would miss. Not her apartment, not her neighbors, not her co-workers, not her customers. Most of all, she wouldn’t miss the person she had become. She herself, was the only one she had said goodbye to.

Amber was going home. Home where she had been miserable under the constraints of decent society. Where her mother tried to run her life and succeeded in sheltering her from every bit of fun she had ever tried to have. Home where the rules felt like a strait jacket on her free spirit.

She had left to try and get away from all of that. Now she was hoping to find it again.  All of it.

She had left with an abundance—savings account, credit cards, even a trust fund once she turned 21. She would return with nothing but tough lessons learned. After buying the necessary tickets she had $5.37 left for meals along the way. Hardly enough to cover the five meals over the two days of cross country repentance.

On the bus she read a pocket New Testament. She ordered off the dollar menu at stops. She avoided talking to the other passengers. And she cried, quiet tears, full of old sorrows and new joys. But mostly she planned how to not be the person she had said goodbye to back at the studio.

When she reached the city, she realized she had made no arrangements to get from the terminal to her home. She had no cab fare, no remaining friends, no means but her restless feet. So she walked, it must have been about four miles. Each block passing a little faster than the ones before.

At the door she grabbed the knob and turned, but of course, it was locked. So she rang the bell. She couldn’t stand the wait so started knocking, until her mother opened the door.

For a second they just stared at each other. Then they embraced, cried, and finally, they spoke. At first both were cautious, but soon there was no stopping the flow. They kept on speaking for the next thirty years, and when it came time to bury her, Amber did so, without regret.