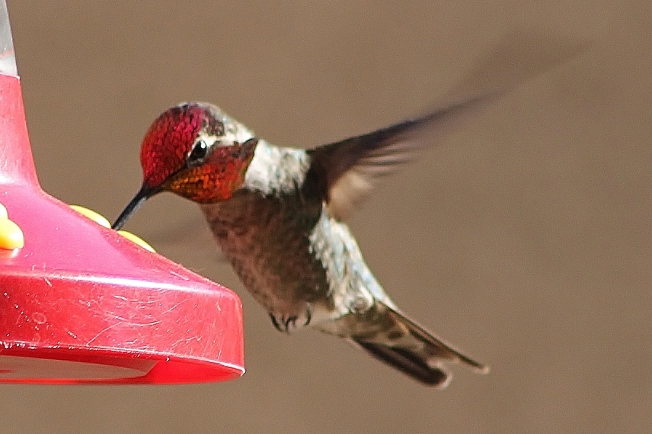 Here is a picture of a male Anna’s hummingbird. The brightly reflective feathers on the face are called the gorget. This happens to be the only hummingbird which has a gorget that goes above the head as well as under it. This positively identifies it as an Anna’s. I can also identify it for the commonly heard call which is a high pitched wispy scratching cry.

In addition to these identifications, the hummingbird has a distinctive display flight. It will pick its target and hover right in front of it. Then it will swirl straight up into the air, reaching up to about 130 feet. It will hover for a moment before diving straight down in a line and then as it passes its target it will circle back and hover in front of it, right where it started.

Being a show off is seldom a positive trait. It might impress people around you. It might earn you a raise or get you a date with a pretty girl—but more often it just shows the world that you are self-centered.

Christians also need to be careful about showing off. We can be so subtle about it, we don’t notice we are doing it. We show off by praying in King James English. Or maybe we quietly draw attention to our own humility. Preachers might be the worst, we can show off from the pulpit and if it works out well people will call it evocative preaching.  Even if it doesn’t work out, few people will point out how bad it was or nobody ever says it was because we were showing off.

Jesus warned against showing off. He taught the danger is when our pride gets to the point where all we want is to be seen by others. Choosing others over God is hardly living out the life of the Christian.

“Be careful not to practice your righteousness in front of people, to be seen by them. Otherwise, you will have no reward from your Father in heaven. So whenever you give to the poor, don’t sound a trumpet before you, as the hypocrites do in the synagogues and on the streets, to be applauded by people. I assure you: They’ve got their reward! But when you give to the poor, don’t let your left hand know what your right hand is doing, so that your giving may be in secret. And your Father who sees in secret will reward you.

“Whenever you pray, you must not be like the hypocrites, because they love to pray standing in the synagogues and on the street corners to be seen by people. I assure you: They’ve got their reward! But when you pray, go into your private room, shut your door, and pray to your Father who is in secret. And your Father who sees in secret will reward you.” 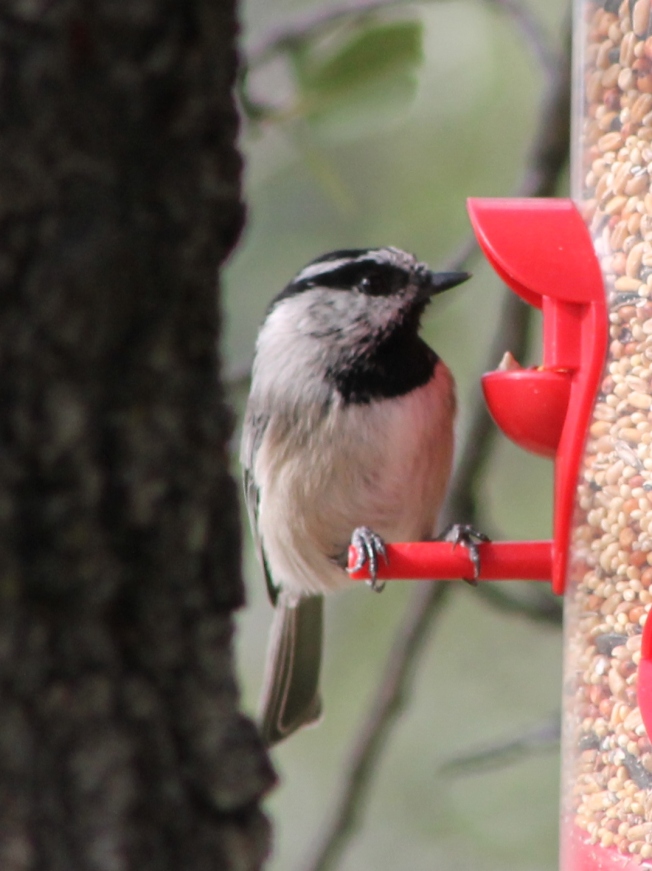 In the Western United States we have outbreaks of different types of tree killing insects. Two notable ones have been bark beetles and needle miners. Mountain chickadees do their part to suppress these tree destroying insects.

During an outbreak of needle miners in Arizona, a single mountain chickadee was found to have 275 of the tiny caterpillars in his stomach. Birds of many types are known to follow the populations of their prey. It might be owls going after rodents, Roadrunners after reptiles, or chickadees after insects but outbreaks of food sources are often followed closely by waves of birds ready to stabilize the overpopulation of their prey.

Birds are able to respond in this way for a few reasons. Perhaps the greatest reason is their flight. They are highly mobile and this allows them to travel to a new food source readily. In addition to this they tend to be highly social. Even though we don’t always understand how birds communicate with each other, it is likely many species will not just pursue food for themselves but also draw other birds to the food source. Another reason birds make such a difference in controlling pest populations is they are energetic. It takes a steady supply of calories to keep these little dynamos moving.

Christians should admire the positive traits of these avian defenders, and possibly imitate them in a few ways. The presence of Christians in a society, community, or neighborhood should always be a positive stabilizing affect. Our presence should help mitigate the presence of destructive behaviors, or sins. But beyond knowing what influence we want to have on society we should have some specific plans about how to get there.

First we should be able to recognize what is good and bad within our world. Not by the opinions of media and culture around us, but by the more accurate eternal truth of Scripture. Having a clear view of right and wrong is central to Christians having the leavening effect on culture Christ expects us to have.

Second we should be solid communicators. Showing those around us, both Christian and not, what is right about right and what is wrong
about wrong requires us to be articulate. One of the reasons we have failed in some areas of the culture wars is not because we took the wrong position, but because we have failed to communicate the truth clearly.

Finally we should maintain high levels of energy in promoting Biblical ideals and moral standards. It’s not acceptable to throw up our hands and surrender to the cultural immorality around us. Instead we must continue to fight the good fight.

2 Thessalonians 3:13 (HCSB) “Brothers, do not grow weary in doing good.” This verse is so simple in content, but so important in Christian living.